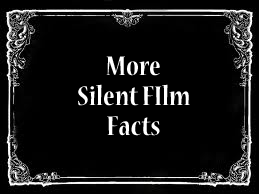 I love silent film facts and I’ve found another minefield of them at the WordPress belonging to Fremont Libraries. Here’s some crackers, so do enjoy: 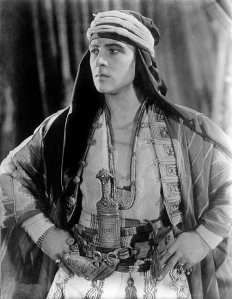 The star of Rex Ingram‘s classic, The Four Horsemen of the Apocalpyse, was Rudolph Valentino, of which was a fact that was previously covered on this Blogsite. However, what I didn’t know was that his christening name was ‘Rodolfo Alfonso Raffaelo Pierre Filibert di Valentina d’Antonguolla Guglielmi’. Now that’s a mouthful alright, but of course he was more well-known as ‘The Great Lover’. As we all know, Valentino died at a young age: 31 and his funeral was a spectacle of massive proportions. But here’s an interesting fact. Seemingly, legend has it that a mysterious Lady in Black still brings flowers to his grave every year on the anniversary of his death. Rumour has it that the current lady in black is not the original, but the identities of any of these Ladies in Black over the past 90 odd years has never been conclusively determined.

One of the great silent film actors of the day, John Barrymore was known “the Great Profile”. John was reluctant to enter the family-acting business. He actually wanted to be an artist and studied art in England to achieve that goal. He was a cartoonist for the New York Evening Journal. John Barrymore is known mostly for his portrayal of Hamlet and for his roles in movies like Dr Jekyll & Mr Hyde (1920), Grand Hotel (1932), Dinner at Eight (1933), Twentieth Century (1934), and Don Juan (1926), the first feature length movie to use a Vitaphone soundtrack.

Thomas Hezikiah Mix was one of the most famous of the silent film cowboys. He was well remembered for conducting his own stunts, for his lavish lifestyle, and what is claimed on the Wilkipedia website as the somewhat embroidered story of his past. One incident of his legacy states that when an injury caused football player John Wayne to drop out of USC, Mix helped him get a job moving props in the back lot of Fox Studios. Like his fellow actor, Ronald Reagan, John Wayne was hugely influenced by Tom Mix, and their acting styles as cowboys were said to be based on the silent film great.

Back during the silent-era, Lillian Gish was known as the ‘Iron Horse of Hollywood’, and although she appeared as a fragile creature on-screen, nothing could be further from the truth in reality. When she was four, she joined a traveling acting company to help support her family. At some stage, Mary Pickford introduced her, and her sister Dorothy, to D. W. Griffith. And so, another silent film legend began!

Theda Bara‘s (Theodosia Goodman) on-screen character was identified the world over as that of a ‘Vamp’. Her character was that of a wicked woman of exotic sexual appeal, who lured men into her web, only to ruin them. Although this image truly suited her character, much of her image and purported biography were created by the studio. It was popular during the silent-era to promote an actress as mysterious, with an exotic background. Bara was promoted by the studio with a massive publicity campaign, billing her as the Egyptian-born daughter of a French actress and an Italian sculptor. It was claimed that she had spent her early years in the Sahara Desert under the shadow of the Sphinx, before moving to France to become a stage actress. The truth of the matter was that Theda Bara had never been to Egypt or to France. She was called the Serpent of the Nile and she was encouraged to discuss mysticism and the occult when she was being interviewed. It is regarded by film historians that it was at this point that the birth of two Hollywood phenomena can be traced back to: the studio publicity department and the press agent, and so the great giant of Hollywood public relations was born.

PS: Don’t forget to click on the links for more info! See y’all next week.